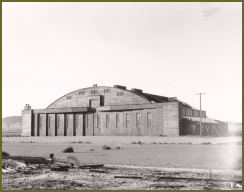 The Army Air Force expanded rapidly after the beginning of World War II in Europe. Less than a month after the German attack on Poland in September 1939, General Headquarters Air Force at Langley Field, Virginia, was considering the desirability of improving the airdrome at Tonopah and of obtaining a large tract of land in that area for bombing and gunnery practice. On October 29, 1940, more than 3,000,000 acres of land (approximately 5,000 square miles) in the public domain were transferred from the Department of Interior to the War Department. Final land problems were resolved in August, 1941, when condemnation proceedings were instituted. The Fourth Air Force, which was to use the range in training combat units, planned to conduct its operations from Tonopah. 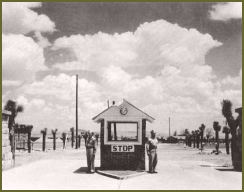 In early 1940 construction was started on a new airfield located seven miles east of Tonopah.

This work was sponsored by the Civil Aeronautics Administration (CAA) and was financed, at least in part, with funds supplied by the Works Progress Administration (WPA). Since the Fourth Air Force would train at the field during the war, construction was coordinated between the CAA and the Army. The Fourth Air Force hoped to begin operations at Tonopah by the end of 1941, but the new base was not ready for occupancy until July, 1942. When the base was finally occupied, it was complete with runways, barracks, mess halls and a hospital, as well as other facilities. Support units were moved in including ordinance, guard, quartermaster, supply, signal, weather, communications and finance organizations. 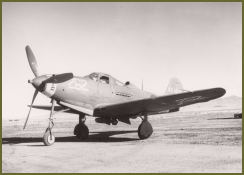 In the months that followed, the number of personnel increased, as the first planes to occupy the base arrived.

These were Bell P-39 Airacobras, a fighter used by the Air Force in the Pacific. By the beginning of 1943 there were 227 officers and 1,779 enlisted men at the field. They included the first tactical organizations trained at the Tonopah base, the 75th and 390th Bombardment Squadrons of the 42nd Bombardment Group. They were followed by three squadrons (the 255th, 353rd and 356th) of the 354th Fighter Group, who arrived on January 18, 1943. When they left at the beginning of March, their place was taken by squadrons of the 357th Fighter Group. By the end of November, 1943, eight bombardment and twelve fighter squadrons had used the base to train for combat overseas. It soon became apparent, however, that the range could not be used successfully as a fighter training area. Possibly due to Tonopah’s 6,000-foot elevation and design problems with the Airacobras, the plans and pilots were being lost in crashes at an unacceptable rate. 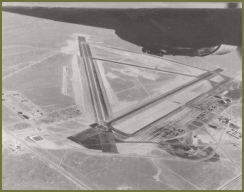 It was decided to change the operation to a high altitude bomber training base to train crews of the
B-24 Liberators.

In September, 1943, about half of the personnel moved temporarily to Bishop Army Air Field, California, in order to provide housing at Tonopah for contractors engaged in an extensive construction program at the base. The project, which cost $3,000,000, included extensions of runways, new aprons, new water storage tanks, additional quarters and barracks, a new post exchange, supply buildings, day rooms, crash stations, warehouses, operations buildings, a hangar, a school building, -and other additions to the airfield as well as additional facilities on the range. By the beginning of November, 1943, most of the construction had been completed. The training equipment and areas included a rifle range, pistol range, skeet ranges, turret trainers, bomb trainers equipped with Norden or Sperry sights, flexible gunnery trainers, navigation trainers, and schools for gunners and radio operators, with the range being available for practicing bombing and aerial gunnery. 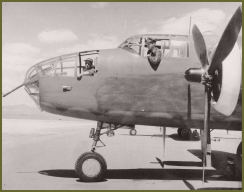 On November 1, 1943, the men who had been sent to Bishop returned, and the 458th Bombardment Group arrived for training.

Upon the departure of the 458th at the beginning of January, 1944, the 470th Bombardment Group arrived at Tonopah to serve as a replacement training unit to prepare B-24 crews for service with heavy bomber units overseas. In a reorganization on March 31, 1944, the 470th was disbanded, its training functions being taken over by the 442nd Army Air Force Base Unit. In the summer of 1944, a Field Test Unit, a branch of the special weapons test organization of Wright Field, Ohio, was engaged in testing glide bombs and other devices at Tonopah. The major activity, however, continued to be the training of replacement crews for B-24 operations. This B-24 program continued until the end of the war. During this time the Tonopah base was one of the largest military operations in Nevada and had one of the largest post exchanges in the 4th Air Force. This exchange, opened in August of 1942, paid many dividends which were used for the benefit of the enlisted men. On Nov. 13th, 1943, it paid a dividend of $10,741.48, one of the largest recorded. The base also had a large bakery with a related doughnut shop. This shop. during 1943 and 1944, sold an average of 400 dozen doughnuts a day.

In October, 1944, there were 66 B-24 aircraft available for the training program. At that time there were 1,264 officers and 5,273 enlisted men, in addition to a large number of civilians, assigned to the base. 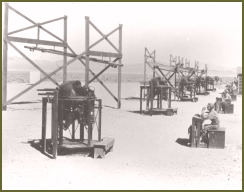 But by March 1945, pressure from the War Department to cut manpower at Army installations resulted in reduction of the number of persons stationed at Tonopah to 437 officers, 3,707 enlisted men, and 184 civilians. On August 23, 1945, a little over a week after fighting ended in the Pacific, the Fourth Air Force placed the Tonopah Army Air Field on inactive status. Personnel and aircraft began leaving almost immediately. On October 15, the 442nd AAF Base Unit was discontinued and the field was made a sub-base of Hamilton Field, California. In 1948, while under the jurisdiction of the 15th Air Force, Denver Colorado the base was deactivated and sold for scrap. Today, all that remains of what was one of the Army Air Force’s largest World War II training bases are four hangars in various stages of disrepair and the runway, maintained by Nye County and used as Tonopah’s Airport.

“A Fond Remembrance From a Grateful Nation” 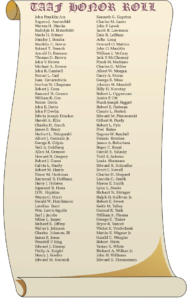 Listed left are the names of 110 Army Air Force men who lost their lives in accidents related to the operation of the Tonopah Army Air Field (TAAF) between 1942 and 1945.

The majority were killed in P-39 and B-24 crashes and the list, compiled by Allen Metscher, is the result of an extensive search of newspapers and death records of the era. There are undoubtedly other names which were not listed in these sources.